Supply and Demand are like two heavyweight boxers that continue to trade punches round after round. For a few rounds, you think Supply has the upper hand and will easily win the match, then Demand comes roaring back and makes Supply look weak and headed for certain defeat. So, which one is stronger, Supply or Demand? That is the question. The answer, however, is constantly changing. In this article in Q2 of 2020, we lamented the weakness of demand but predicted it would surge strong after the pandemic. We continued to build through the pandemic in anticipation of that comeback by our hero Demand. We have not been disappointed! The natural demand that was not fulfilled during the pandemic did not go away; it was simply delayed. At the same time supply was knocked to the mat several times and has been slow to get back to full strength, more unmet demand continued to pile on the left-over demand from the pandemic.

Two years later, Demand is still outstripping Supply. The insatiable Demand is driving the demand side to bid up prices at a rate not seen in decades. Having available product is the only game in town in the industrial real estate market. The uncertainties in the cost of construction and supply-chain delays make build-to-suits a very risky proposition.

We have one build-to-suit project currently under construction, but the only way we could make it happen was to divert buildings we already had on order to the desired location. This saved 6 months in the project timeline. We would not have been able to meet their schedule any other way in this market.

Demand is continuing strong in industrial even as retail and residential are softening. The softening in other sectors should allow supply to gain some ground on the continued strong industrial demand. The industries that we serve are in fact adding to the available supply as well.

Full employment, meager supply and unmet demand are all working to drive up prices. This cycle will run its course as the supply chains continue to recover and expand. Supply is not likely to get back to matching Demand for 6 to 8 more quarters. For the foreseeable future, it will be important to take what is available and pay the asking price. It won’t stay available long!

While I am supposed to be primarily writing about the industrial market, there is a much bigger challenge that faces America that indirectly affects everything, including the industrial real estate market. So, here I go…

First, let me state the problem: Never-ending political promises by both parties with never any accountability or projected risk or reward.

When corporations first began to be traded on Wall Street, there was malfeasance, corporate mistrust, and blatant disregard for fraudulent actions. However, to provide legitimacy, there was a move forward that provided some consistency in accounting rules. Otherwise, how could you ever invest in the stock or the industry without comparable choices and the facts being accurate? This became “generally accepted accounting principles” (GAAP). Without GAAP being instituted and in full force around the beginning of the 1880s, we wouldn’t be able to invest properly today. So, it brings us to a point where legitimate companies all play within the “guardrails”.

Another example might be legal reforms. While there have always been customs and known principles (since God was a little boy), Democratic countries now have a well-defined set of rules topped with legal precedence and consistency that we can all rely on. Now, when businesses or individuals overreach, the ultimate legal guardrails are with an independent board, called the Supreme Court. They provide legal sound reasoning for us to initiate any worthwhile endeavor.

How about the Federal Reserve Board? It is an independent body overseeing central bankers trading with banks; and, while it may be appointed by politicians, the terms are long and overlap. While we don’t always agree (Currently, I don’t), the Federal Reserve Board is independent enough that it does provide a specific set of goals that has been consistent in the banking system, thus the risk/reward is reliable.

What is needed is an independent board that provides estimating for political actions, promises, and projections with accountability. This board would preside over the Office of Management and Budget (OMB) and the Congressional Budget Office (CBO). It should mandate the accounting principles which are going to be factually based; and, therefore, those two institutions will turn out reliable numbers, not politically motivated numbers. This should be transformational. Instead of unrestrained promises like with the $3.5 trillion dollar proposal which have only parts of the cost/liabilities listed in the bill, it will force all costs to be recognized and resulting reactions to be considered. Political reality will become normalized.

In this era of extreme radicalism about every topic, one true healing source could be this proposed board; because, while we may argue, debate, “cuss and discuss” the ending results of political proposals, the facts will be reliably and consistently conveyed about the chosen topic.

Responsibility is a powerful force.

After almost 10 years of a down market, there looks to be a light at the end of the industrial real estate tunnel. Since the beginning of the year, the market is once again picking up momentum. To meet this demand, The Hollingsworth Companies are adding 4 Complete Speculative Buildings throughout the Southeast.

David Jones Industrial Park in Andersonville TN received the first spec building at 114,000 SF of available space. The facility is located 20 minutes north of Knoxville along I-75. This area includes a range of automotive, distribution, and home building supply companies.

SouthPoint Business Park Alabama will receive a 252,000 SF and a 108,960 SF facility. The new buildings will be completed in November and December 2017 respectively. The SouthPoint Park, Alabama is located at the intersection of the I-65 and 1-565. This location provides excellent access to markets from Nashville TN to Birmingham AL. This corridor is highly favored by companies that serve the Southern Automotive market. This park is also well located to the Army Procurement Command, Redstone Arsenal and NASA’s Marshall Space Flight Center.

SouthPoint Business Park, Mocksville, NC is in the process of adding 4 additional lots that will range in size from 13 to 32 acres. A 108,960 SF facility will be completed on the first lot in February 2018. The SouthPoint Business Park, North Carolina is located just miles from I-40 and 25 miles from the I-85/I-40 junction giving it close access to all markets along the eastern states. Mocksville is centrally located in North Carolina which is 25 miles from Winston-Salem, 60 miles to Charlotte, and 125 miles from Raleigh NC.

The Hollingsworth Companies Southern Advantage Facilities are built to provide maximum flexibility for any prospective tenant. The buildings include 32’ clear height, 60 x 60 column spacing, ESFR fire suppression system, and LED lighting systems. Office space can be individually configured to a prospect’s final specification in 60-90 days to allow for an expedited move in date.

To learn more about these properties, contact Tom Mann at 865-457-3701 or tmann@hollingsworthcos.com. 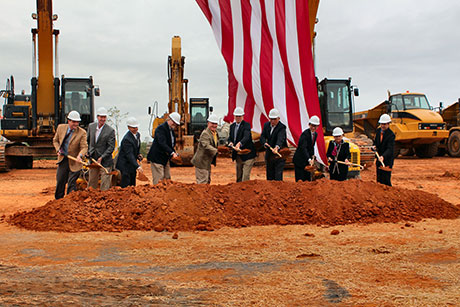