The Town of Amherst was established in 1807 and was named after Sir Jeffery Amherst, a British Major-General who was the hero of the Battle of Ticonderoga during the French and Indian War and later became Governor-In-Chief of the Colony of Virginia from 1763 to 1768.The Town of Amherst was originally known as “The Oaks” and “Seven Oaks” and started as a stage station on the Charlottesville-Lynchburg road. Amherst has been the county seat of Amherst County since Nelson County was partitioned from Amherst County in 1807. The original courthouse was built in 1809 on two acres of land purchased “from a Mr. Coleman for ten shillings”. The original courthouse was torn down 1872 and the present courthouse was built “from homemade brick of Amherst County clay”. On April 15, 1910 Amherst was incorporated by order of the Circuit Court, and a new charter was granted to the Town by the General Assembly in 1950.

Amherst is blessed with a diverse employment base. Local major employers include Clorox (plastics), Hermle Black Forest (clocks), Buffalo Air Handling (air handling machinery, Greif Brothers (paper/liner board). Amherst County has a civilian workforce of approximately 15,600 with an additional 126,000 in the Lynchburg MSA.

Sweet Briar College is a major cultural center for the community. The college sponsors many concerts, lectures, and dramatic productions that are available to the general public. An annual tennis camp operated by Dennis Van der Meer is hosted by the college and draws participants from the county residents and students from across the nation.

The Town of Amherst is located at the base of the Blue Ridge Mountains in Amherst County. Its location in Central Virginia adjacent to Sweet Briar College provides an uncrowded yet cosmopolitan feeling to the Amherst environs. From the mountains to the beach to staying at home, there is no place like Amherst! The Town of Amherst is served by US 29 and US 40, which is the main east/west highway in southern Virginia connecting Roanoke to Norfolk in just 15 miles to the south and interstate 64 in 45 miles to the north.

Under Construction Ready in 120 Days

Build to Suit available in as little as 180 days 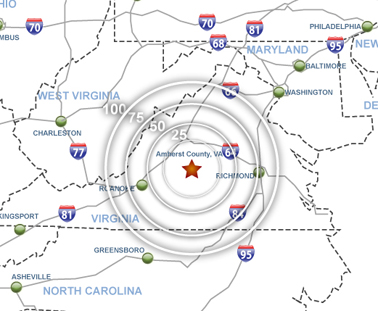