The region was home to Creek Indians, whose towns were located along trading paths and waterways in the area. In 1802 the Treaty of Fort Wilkinson transferred control of the area to the state of Georgia.European immigrants followed a similar settlement pattern with locations of settlements in the area determined primarily by transportation technologies. Wagon roads widened from existing Creek trails became migration routes for settlers who arrived to establish farms and towns. Their settlements clustered first around river fords, then commercial crossroads and railroad junctions. Towns grew at Rain’s Store (later Jeffersonville).

The county seat was originally mandated by the legislature to occupy the most convenient location for the citizenry, toward the center of the new county. A site was surveyed, and the town, named Marion for Revolutionary War general Frances Marion, was incorporated in 1816. Near that site, now deserted, geographers mapped the exact geographic center of the state of Georgia. In 1868 nearby Jeffersonville became the county seat. Jeffersonville and nearby Danville are the two incorporated cities in the county. Other communities include Dry Branch and Tarversville, both unincorporated.

The construction of Interstate 16 gave Twiggs County increased access to both the coastal areas of Georgia and the metropolitan areas to the north, once more placing the area in its historic context as a crossroads of commerce and migration.

Twiggs County farmers became part of the southern plantation system in the nineteenth century with the development of upland cotton, which they grew for export. After 1865, agriculture remained a predominant business in the area, along with the later addition of forestry products and, in the twentieth century, kaolin mining. Besides cotton, primary crops now include peanuts, pecans and soybeans.

Railroads arrived in the county with the construction of the Macon and Brunswick (later Norfolk Southern) line in 1861, which was completed in 1870. The Macon, Dublin, and Savannah Railroad (later CSX), completed in 1891, passed through Dry Branch, Fitzpatrick, and Ripley, bringing increased commercial opportunities to those communities. With the development of the national highway system in the 1920s, local merchants served traffic moving between Atlanta and Savannah on U.S. Highway 80, also known as the Dixie Overland Highway. The Dixie Overland Highway Association’s motto was “The Shortest and Only Year Round Ocean-to-Ocean Highway.”

In the 21st Century, with its proximity to the junction of I-16 and I-75, Twiggs County is still an important crossroad location for today’s complex global supply chain and distribution operations. For over two centuries, Twiggs Countians have been doing business with their neighbors and, now, with people across the globe. The two Interstate 16 Industrial Parks (North and South) are located at the interchange of I-16 and Hwy. 96. Credit: excerpts of the text above are from The New Georgia Encyclopedia

Under Construction Ready in 120 Days

Build to Suit available in as little as 180 days 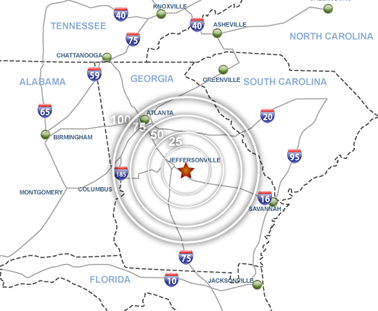